A mid-sized French saloon? We take a look at the new Peugeot 508!

Alongside the arrival of cars such as the Volkswagen Arteon and Kia Stinger; Peugeot has seen the trend for modern saloon design and has stirred a welcome dose of eye-catching, curvaceous style into the 508’s recipe. A big French saloon might be an oddball choice among the array of cars on offer from German brands BMW, Mercedes-Benz, Audi and Volkswagen but the 508 which is more like a saloon-tailed hatchback is a welcome change!

Peugeot’s updating with this latest 508 is so comprehensive it can barely be described as being related to the previous generation. The rear light bar is borrowed from the brand’s Instinct shooting brake concept, while the LED ‘tusks’ in the front bumper are cutting-edge at this price. There are frameless doors, chrome exhaust tips, wheels that properly fill their arches and a low sloping “fastback” style roofline. The new car is conveniently sized being marginally smaller and lower than it’s predecessor while also being 70kg lighter thanks to its steel monocoque.

As the sporting looks might hint, the Peugeot 508  offers a surprisingly involving drive. Perhaps not to the extent that it’s going to trouble a BMW 3 Series, but it’s certainly at the more dynamic end of the spectrum. Straight-line performance is agreeable for a car in this class with a 0-62mph time of 8.3 seconds and a top speed of 146mph. Selecting the Sport mode via the centre console also makes a handful of changes to its character including more responsive throttle and meatier steering as well as more of a synthesised engine note being broadcast inside the cabin. However while the gearbox is smooth-shifting it is infuriatingly restless, ceaselessly changing up and down again in the apparently vain hope of finding a ratio it’s happy with; especially at town driving speeds.

Based on the same platform as the 3008 SUV, you’d expect a similarly comfortable ride and while it does somewhat deliver in this area it’s not quite as good as absorbing bumps (and potholes) with the firmer suspension. As a result some imperfections are transmitted through to the cabin, especially on models fitted with the largest 19-inch alloy wheels. However, it’s by no means uncomfortable! The flipside of the coin is that the firmer set up on the 508 gives far less body roll when cornering. It feels dialled-in to the tarmac, with impressive grip levels. Initially the small steering wheel feels a little odd, but it makes the steering very responsive and gives the 508 an agile nature when compared to the majority of its rivals. 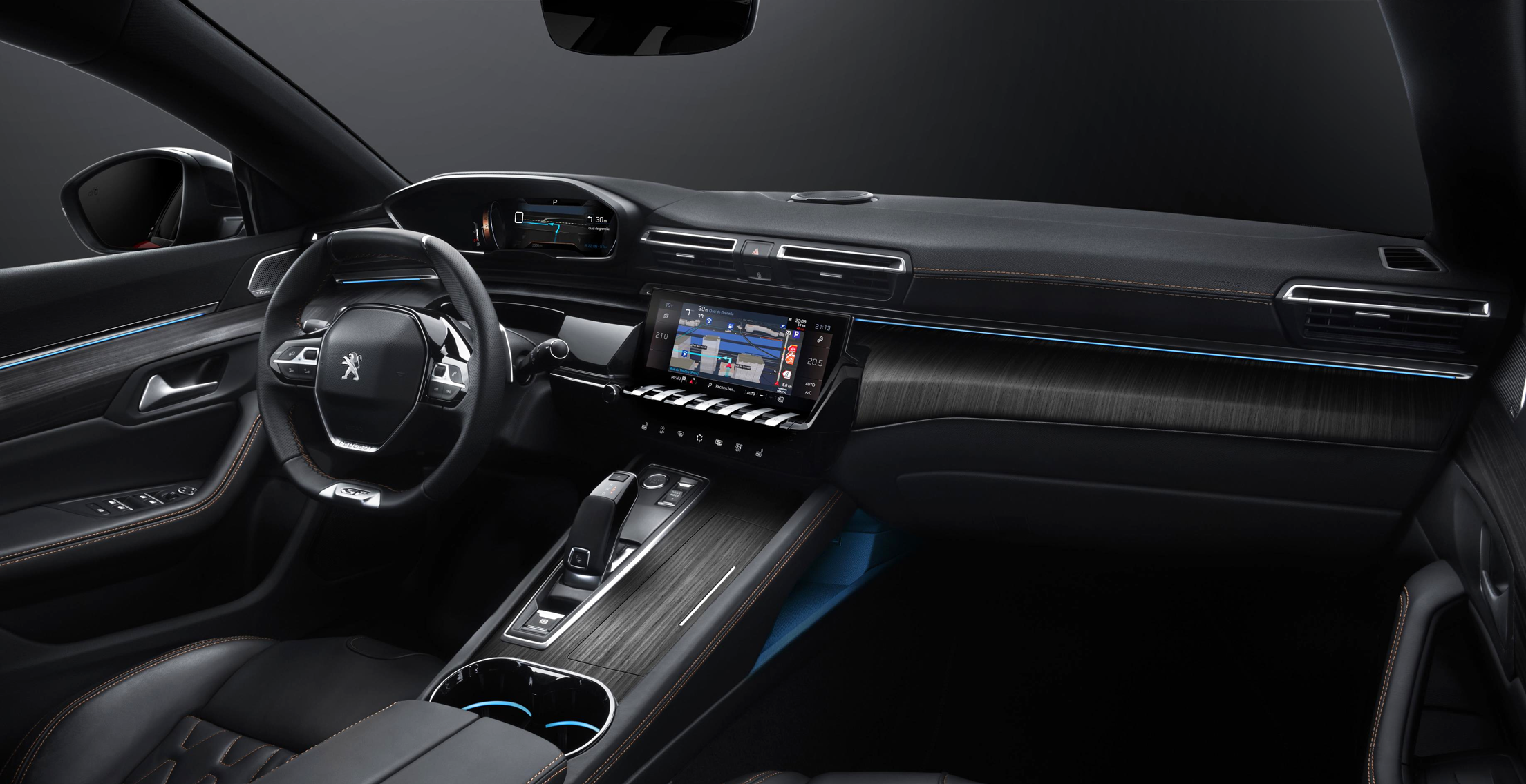 On the inside the 508 implements Peugeot’s “i-Cockpit” driving position with the instruments mounted higher up on the dash and visible above the steering wheel rather than through it which takes some getting used to and the correct seat position! This digital instrument cluster allows for the driver to swap between modes that emphasise different driving information, navigation, driver assists or even night vision on the top spec. In the centre console most variants have a 10-inch touchscreen for your navigation and infotainment systems while the base spec has a smaller 8-inch screen. Overall for all model variants there is great equipment as standard with all having sat-nav, Bluetooth, DAB Radio, Apple CarPlay & Android Auto on board. As well as that safety systems such as automatic emergency braking, a distance alert system and lane assistance are all as standard which is very impressive. The seats are big and plush with plenty of room up front but in the rear the fastback sloping roof limits comfy headroom for anyone above average height. The 508 saloon’s boot has a 487 litre capacity when the rear seats are raised which increases to 1,537 litres when they’re folded flat; an average size for cars of this class. The quality look inside is backed up by material quality and a fit and finish that has a nigh-on premium feel; get in one and you’ll definitely be tempted away from rivals.

Should you buy one? Well it might not seem like the obvious choice when looking for a saloon with German rivals tending to be the popular options; Peugeot have created something different with the 508. It’s stylish with a modern design, fun to drive on the open road, well equipped and while it’s not the roomiest car in the class it does pose as a great option for a more exciting family saloon or even company car.