Citroën is a major French automotive manufacturer which began in 1919 and was founded by André Citroën. It’s known for its bold and futuristic design and technological innovations, which gives Citroën its competitive edge.

Who are its main competitors currently in the market?
It competes in one of the major areas of the car market now, the “Superminis”. Therefore, this means the C3 will be running against the likes of the Ford Fiesta, Vauxhall Corsa and Volkswagen Polo. Although, the main feature that the C3 engineers tried to capture was “comfort”, therefore the model differentiates from the competitors previously mentioned, as it’s not as defined as a Polo, and doesn’t handle as nicely as the Fiesta. Nevertheless, this Citroën model has a very stylish exterior to match its smart-looking interior and the engineers have included as much bump absorption as possible!

How does the C3 differentiate from the C2?
The original C3 was launched alongside the C2, both models were manufactured to replace the Saxo. The two models are different in terms of their target audience; the C2 primarily targets those who are new to the roads particularly younger drivers. The C3 however, offers a more modernised and mature choice of design, with its rounded styling and a larger, more practical five-door body. 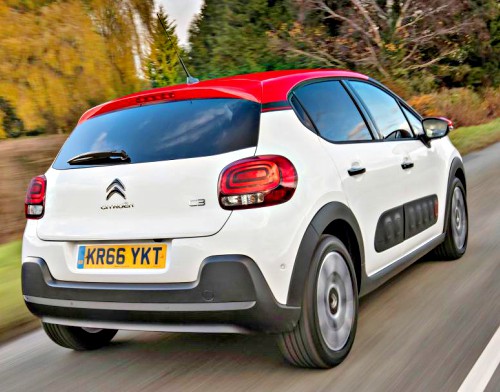 The styling of the C3
The look of the C3 has been inspired by the C4 Cactus, in terms of its SUV – makeup, with its black plastic bumpers and wheel arch extensions, in addition to its rubbing strips on the doors, while its headlight design is like the C4 Cactus too. Its fresh looks are also inspired by the C4 Picasso MPV, and at the rear are signs of the DS3, due to its smooth boot lid and square tail-lights. Its trendiness doesn’t stop there, as inside it includes contrast – coloured door bins, designer luggage – themed door pulls and they don’t hinder your knee space. 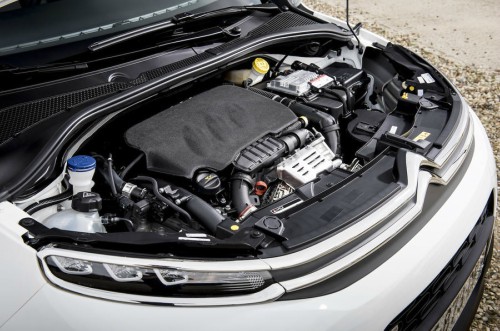 The engine
Citroën is offering two types of engines, a 1.2 PureTech three-cylinder petrol and
1.6 BlueHDi diesel, but both come in different outputs. The PureTech engines offer 68hp, 82hp and 110hp forms, but the BlueHDi diesel is offered in 75hp and 100hp guises. Their power outputs mean their performance is adequate, so this wouldn’t be suited for an audience who enjoys the thrills of a fast car. All the cars come with either a five or six-speed gearbox, but if you want an auto, the only option is to go for the top-spec 1.2 PureTech 110hp with the EAT6 six-speed automatic.

What are the running costs like?
The overall make has a reputation for having good fuel efficiency from its small petrol and diesel engines, in which the C3 continues to guard the record. Therefore, running costs would be cheap and cheerful.
Warranty
It lasts for three years or 60,000 miles, whichever comes soonest. This is just about standard for the industry but some rivals - notably offerings from Kia and Hyundai, plus Toyota - offer much longer cover, at up to seven years in Kia’s case.

Servicing
The servicing intervals on the C3 are as conventional as its warranty; it requires maintenance every year or 12,000 miles. Citroën has yet to confirm precise details on the costs involved, but it offers a couple of ways of spreading the bills: So, to conclude, the reasons to go for a Citroën C3 is that it has low running costs, generous boot space and scope for personalization. However, it has vague steering, body roll in corners and a slightly noisy engine.