How To Correctly Display A Personalised Number Plate

Do you know the legal standards of a personalised number plate?

A personalised number plate adds a luxurious feature to any car. However, with this personalisation comes risks too – these including a £1,000 fine and a failed MOT.
Do you know the legal standards? Here’s the CarCliq guide to the private number plate regulations and laws. 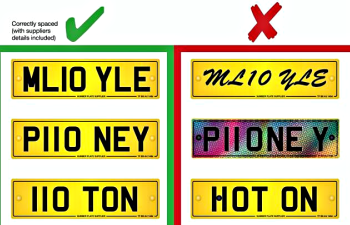 The Law requires that plates must be legible and comply with the set standards, so you are able to read the plate easily. It is illegal to place a screw or bolt in a place where it should not be or making the letters and numbers smaller.
Six key mistakes drivers commonly make with number plates: Letters accompanying these flags are limited to the following: Did you know your car will fail its MOT test if you drive with incorrectly displayed number plates?
According to figures obtained from the Metropolitan Police, around 800 number plate offences were recorded in the first 5 months of 2019. This included vehicles failing to conform to the regulations due to dirty and obscured plates and vehicles with no plates fitted at all!
​
So, if you are considering investing in a personalised number plate, please make sure you are complying with the law.
Other CarCliq articles that might interest you:

Over A Third Of Motorists Fail Their MOT By Not Making Basic Checks
The Number Plate System
EVs To Get Green Number Plates
M.O.T Extension Could See Over 1 Million Unroadworthy Vehicles Returning To The Roads