We take a look at Lexus’s latest sports car, the exciting LC!

Possibly the boldest and most exciting car to come from Lexus since the LFA supercar back in 2010; the LC is a large, fast and luxurious coupe sports car designed to rival the BMW 6 Series, Maserati GranTurismo and Jaguar F-Type. There are no screaming V10s here with the experience tailored more to rapid grand touring than hot laps but the Lexus LC is still a force to be reckoned with and a beauty to behold.

Spawned from the 2012 LF-LC concept the new Lexus LC is available in two variants; the LC500 which has a naturally-aspirated V8 under the bonnet and the LC500h which pairs a V6 engine with a hybrid system to improve performance and fuel economy. The LC500 produces a total of 359bhp with the combined outputs of the V6 and electric motor capable of getting from 0-62mph in 5 seconds and achieving 155mph. The V8 LC500 is an entirely difficult car to drive sending 464bhp to the rear-wheels and capable of getting from 0-62mph in 4.7 seconds and a top speed of 168mph. Both come mated to an automatic gearbox which in manual mode has ten steps the driver can select from which Lexus claims “dispenses with the infuriating rubber band feeling” you can sometimes get at lower speeds; however it doesn’t entirely. Seize the paddles and the shifts themselves are laborious, and while the revs do rise and fall more closely with your right foot, it’s still a far from linear relationship, with flairs and dips when the sound should be constant. Really gun it and even in manual mode the V6 whines away at the top of its rev range and with the V8 you’ll be shifting down just to hear a crack from the exhausts and flourish of revs. 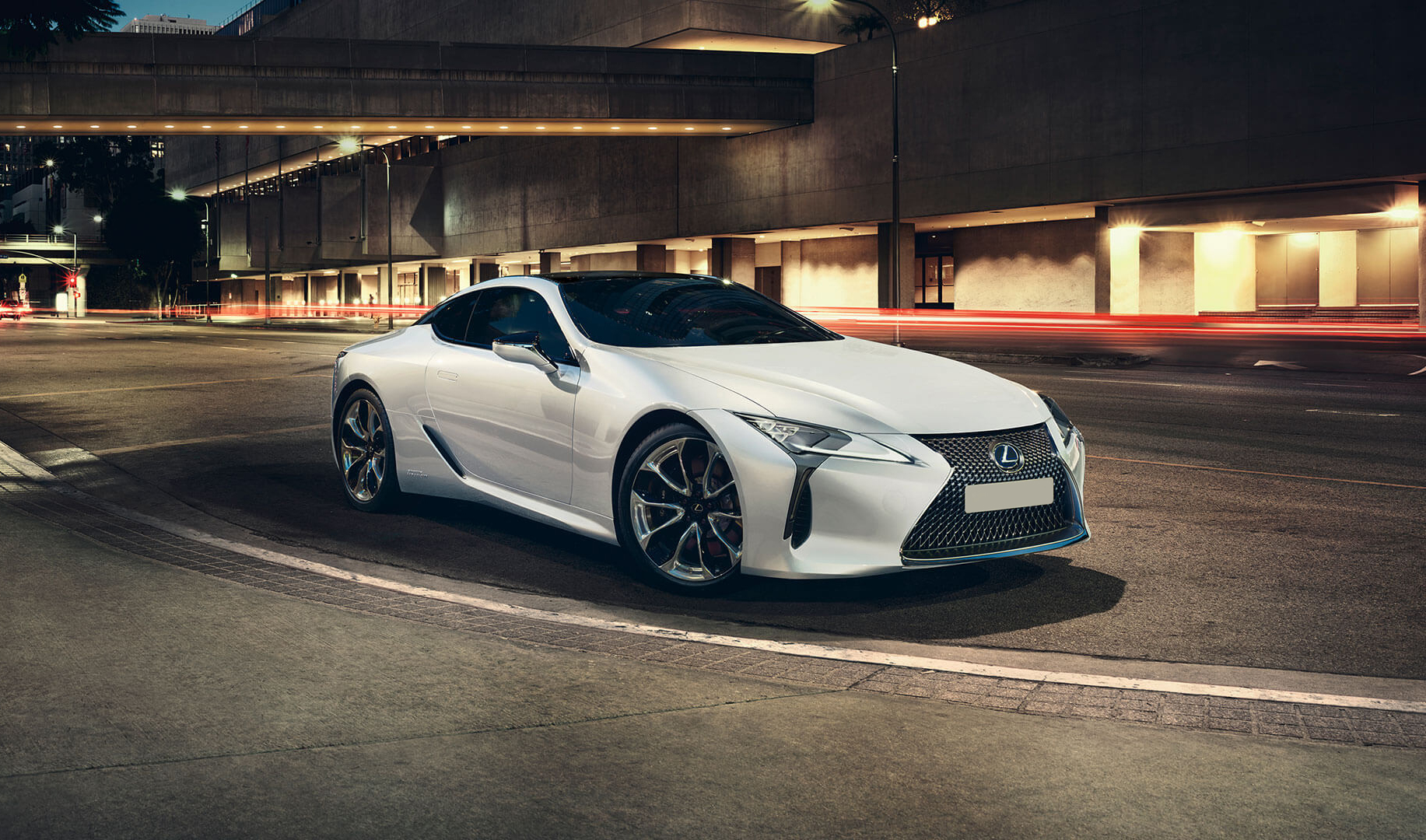 With the “L” in LC standing for luxury you’d expect that the ride ought to be comfortable; however on the road the suspension is fairly firmly sprung so you do feel quite a few bumps as you drive along. You can improve the ride by keeping the adaptive damped suspension in Comfort Mode but you’ll still be able to feel some. The Lexus LC is finely balanced to drive and has surprisingly agile handling with the four-wheel steering system and active variable-ratio steering rack; turn in at speed and there’s body roll, this is a 1,935kg coupe after all, but the rear-steer system finds agility. For a large grand tourer the economy figures aren’t too bad; with the V8 LC500 having a combined MPG of 24.4 and the hybrid LC500h having a more respectable and practical combined MPG of 42.8.

The inside captures the intentions of the car perfectly with a low driving position giving you the feeling of luxury and a sporty performance car. The sports seats that come with the Sport and Sport+ packs also feature additional bolstering to hold you in place during any spirited cornering. Across the dashboard and console there’s a splurge of buttons and touchpads, screens and stalks sprouting from every surface and while there are numerous different angles making up the interior it’s executed with flair and attention to detail. Technically as a 2+2 coupe there are back seats if you can call them that; it’s best to think of them as additional luggage space to make up for the small 197-Litre boot space. That’s less than half of that offered in the BMW 6 Series and shrinks even further in the hybrid LC500h to 172-Litres thanks to the battery positioned behind the seats. You do get a hint that the car’s touring practicality was sacrificed somewhat for that striking exterior! 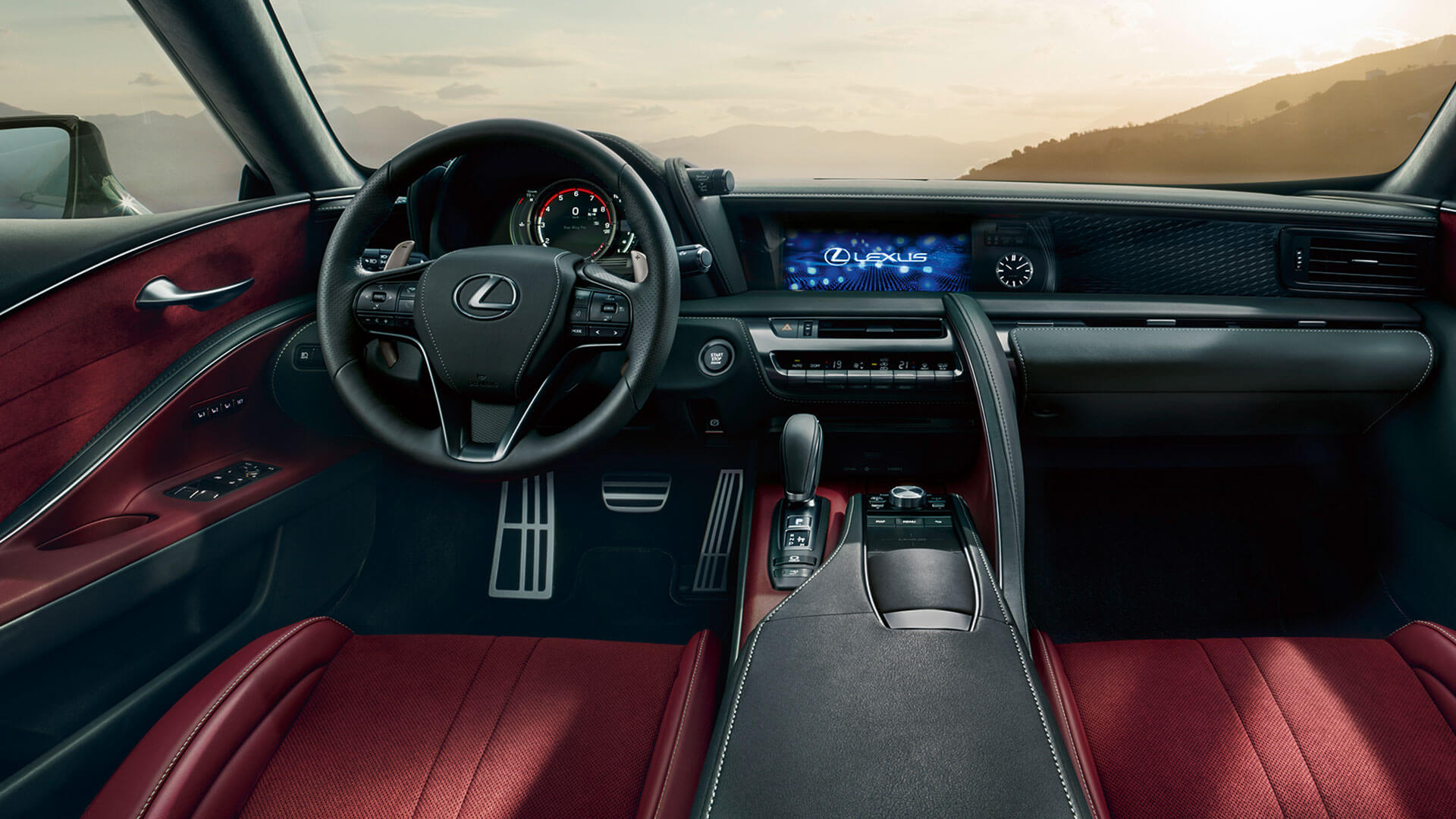 Should you buy one? The Lexus LC is certainly an attractive grand tourer posing as a more exciting option over German rivals; the design, the technology, the price point are all very bold in comparison. It may not have the total luxury feel that you’d expect at this level but it’s a pleasant match between comfort and performance. As a keen driver you’d no doubt prefer the sportier V8 LC500 with the sharper responses and the attractive soundtrack; while if you’re looking for a more practical tourer for longer journeys you’ll find the hybrid LC500h a better fit. We’ll leave it up to you to make your choice!

Let us know your thoughts regarding our Lexus LC review via our social media pages.

Other Lexus Reviews by CarCliq: