Not only a driver’s car but it makes you feel as though a palace has been given four wheels.

The first words out of my mouth when I handed my all-new Jaguar XF demonstrator keys back at Pamplona Airport were “I’m going to miss that motor”.  And there’s a reason for that: the fresh British saloon I had on test in Spain made my life far more relaxing than I had envisaged.
Now, let me make it clear; the two days I had with the XF involved traversing snaking roads high into the Pyrenees, hammering along fast stretches of motorway and negotiating narrow urban streets.  The part of northern Spain I was in involves rural transport, too – and, with that, the odd wandering herd of cows, goats and sheep.

My point is that, whether driving at 70mph or sat still waiting for a shamble of sheep to move, the XF looks after you.  The soft leather seats, the hushed cabin, the excellent brakes and, even the sound system, make you feel as though a palace has been given four wheels.

When there is a chance to bury your right foot into the deep carpet, the creamy smooth powertrain of the rear wheel drive Jaguar XF 380PS S, on test here, pulls the scenery by the side of your head briskly.  It is done in such an uncomplicated way that the speedo needle can nudge three figures all too easily. Pure performance aside, handling is stunningly good. 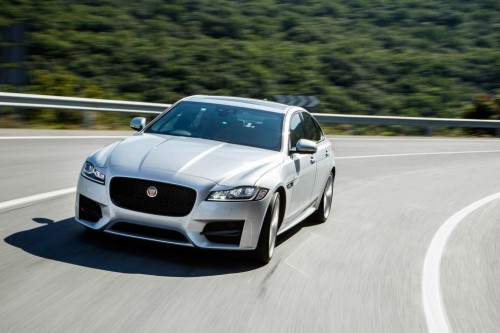 Indeed the 2016 XF offers the fun already available from the Jaguar XJ, mainly due to its precise steering, lack of body roll and excellent traction. This was demonstrated perfectly when we stopped off for a bit of cheeky track driving at the Circuito de Navarra.  This modern motorsport race track, near Los Arcos, is a 3.933 km permanent road course that hosts the Superleague Formula series and the FIA GT1 World Championship.

Under expert instruction, I managed to get the XF to behave like the beast it can be.  The car will hold on to the surface like Velcro, only stepping out when pushed to levels you’d never attempt on a public highway.  Jaguar’s PR team did a good job by really showing us that the new XF isn’t just a mile muncher – it’s a machine offering pure dynamism. In other words, it truly is a driver’s car.
The specification levels of the new XF are lavish.  The cabin is a seamless blend of contemporary luxury materials and finishes, traditional Jaguar craftsmanship and state-of-the-art tech, with features such as a reconfigurable 12.3-inch TFT instrument cluster, laser head-up display and an InControl Touch Pro premium infotainment system. 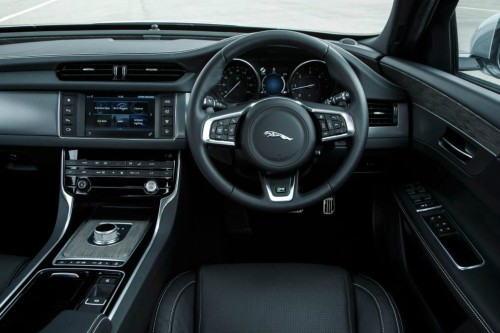 What’s more, stereo camera technology enables autonomous emergency braking, lane departure warning and lane-keep assist systems.  Adaptive Cruise Control with Queue Assist takes the stress out of motorway driving in stop-go traffic by tracking the vehicle in front, at a safe distance.
With its plethora of talents and refreshed more modern exterior, the XF is soon etched on your mind. From a distance, there are slight hints of Audi at the rear, but the car doesn't look as much like the other premium executive saloons you see double-parked outside Michelin-starred restaurants in Chelsea or in City of London corporate car parks.

In summary, this new XF is loaded with a host of awesome tech, making the driving experience as luxurious and as exciting as possible. The Jaguar’s cabin is sophisticated and sturdily built and the car is rapid, whichever model you opt for.  Indeed, the Jaguar XF 380PS S model, driven for this review, is as fast as you are ever likely to need.