What Type Of Tyres Do You Need

With a range of tyres to select from, we want you to be educated upon which type is better suited to the certain conditions more than others.

Firstly, you have cross-climate, these are labelled as the most adaptable in the tyre market, due to the rubber compound being able to respond well to both warm and cold conditions. This is because of the tread of the tyres crossing over between the winter and summer designs, as they involve deeper grooves and knobbly sections suiting the colder climates, whilst having a basic layout with larger sections to suit the warmer climates.

Then, as previously mentioned the summer tyres. These have a much more simplistic design, in which are better to be utilised in the UK for the majority of the time. The reasons for this are that the structure of the surface provides both grip and stability in dry and wet conditions, whilst also being able to work the greatest in temperatures above freezing. Another feature that this tyre beholds, is its straight central grooves and angled outer sections; this delivers a completely better performance on British roads due to its softer compound.

Next, the winter tyres. These are perfect for when the climate is at sub-zero temperatures and the surfaces aren’t exactly the driest. They contain a different chemical make-up compared to the summer tyre, which enables them to maintain their softness and hold the grip in colder environments. Furthermore, the tread pattern is broken up with an increased number of grooves and sections to displace more water and snow, as well as assist with traction ice.

Part-worn tyres are typically sold with around 50% of the original tread depth – meaning they have often been used for several thousand miles prior to the sale. However, a set of these is considerably cheaper than brand new tyres, which is ideal if you are on a budget. Downside, they do not last as long and the tread on the tyre is usually worn to a certain degree compared to a new set

Finally, you have run-flats. These types of tyres come with the benefits of having a special lining inside the rubber that allows you to run further than normal following a puncture. The special reinforcements on the sidewalls support the car on your travels to replace the tyre in a situation where a standard tyre would be difficult to control. The only downside to this specific tyre is due to its advanced structure it can cause an increase in price compared to a standard tyre and can in some scenarios affect the ride. 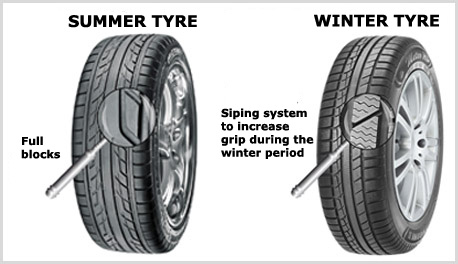 Now, what tyres should you use?
For a vast amount of UK drivers, summer tyres would be the best recommendation from us as we think that they provide the best job because of our climate and conditions we face throughout the year. Also, if you don’t mind spending an increased amount on the run flat tyres, they are extremely worth the investment, as when the dreaded scenario occurs when you have a puncture, they can help you get to a tyre shop or garage instead of you having to stop the car.
Here are some important facts to consider: In summary… Although it is not the law, it is best having matching tyres on each axle In Germany for instance all tyres must match, it is different in the UK. If you stick to the tyres as fitted originally it will best suit your car.