Hyundai has always produced cars that are ahead of their time, this including the Hyundai Nexo SUV. This is the manufacturer’s second-generation fuel cell SUV, which has evolved the game completely.

Many of you may disagree and stay clear of this type of fuel source, however when speaking to Hyundai’s fuel cell experts, you’ll walk away convinced hydrogen and fuel cells will be the main part in the future of our cars. The Koreans have continued to live up to their reputation and implemented lots of tech and more appealing hydrogen-powered cars into production.
Performance
Unfortunately, the Hyundai Nexo SUV isn’t as nippy as other EVs in the car market. The electric motor produces 161bhp and 395Nm of torque, and it allows it to do 0-62mph in 9.2 seconds.

Therefore, in comparison to the 175bhp 1.6-litre petrol Tucson, this will beat the Nexo, due to the range of 512 miles based on a claimed fuel economy of 37.7mpg. Whereas, the Nexo misses the mark, as it claims a 497-mile range with its three hydrogen tanks (these hold 156 litres of fuel which costs around £80 to fill up). 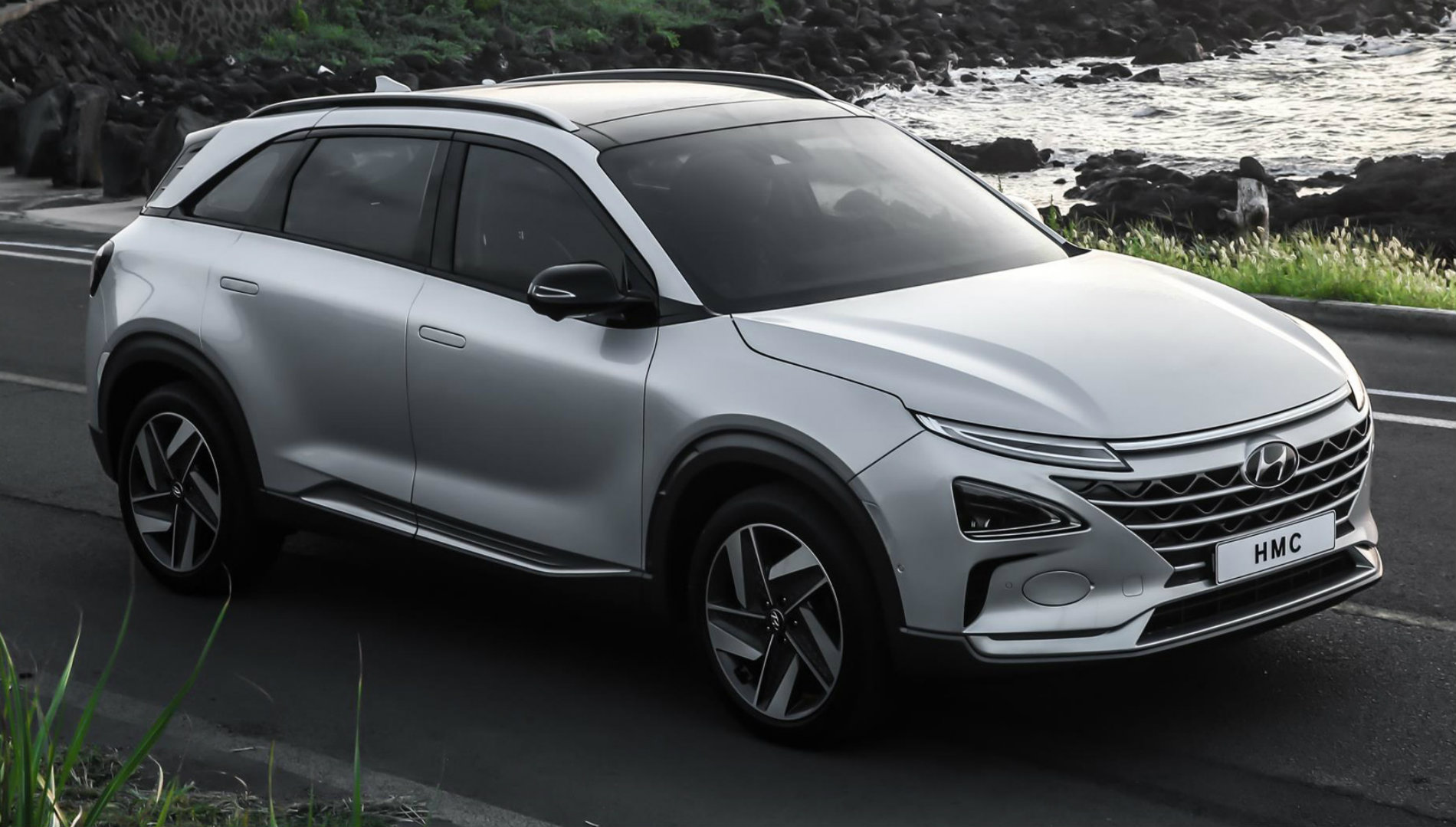 Driving Experience
When hydrogen reacts with oxygen in the fuel cell – this creates electricity. Therefore, when driving the Nexo, you won’t be shocked to find out it shares the same characteristics as any of electric car: quiet and relaxed.

However, the way the Hyundai Nexo differentiates from the iX35 is that it is more hushed, this is because a more efficient driving system has been installed, whilst reductions in weight have benefitted the ride and handling. It can feel quite heavy on the road, but not uncomfortably heavy, you can feel this when going around bends or when braking.

When steering the Nexo, it’s exceptionally good for a hydrogen-powered SUV, however, we wouldn’t quite say it’s as responsive as a sports car and doesn’t compare to the Jaguar I-Pace. However, Hyundai has given you the option to choose from different drive modes to suit your taste when driving. 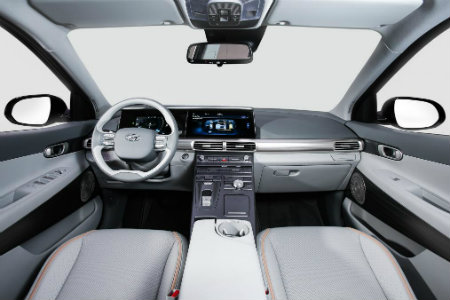 Exterior – Design – Interior
The SUV has been designed with sleek lines and pop-out door handles, eye-catching LED lighting and clever aerodynamics – so, if you’re trying to get a car to turn heads on the high street, your best bet is the Hyundai Nexo SUV. The grille design has been carried over, however, it’s larger due to the purpose of allowing more air in for the fuel cell.

The interior inside certainly matches the fine exterior, with a HUGE 12.3-inch infotainment screen and a seven-inch display ahead of the driver. In addition to this, there’s sleek metallic switchgear on the floating centre console and high-quality eco-friendly plastics throughout. The materials used within the interior are also sustainable, such as the vegan “leather” and plant fibres found in features like the floor mats.
In terms of space, there’s plenty! The car’s current dimensions are 4,670mm and it’s nearly 200mm longer and a bit wider than the Hyundai Tucson SUV. This just equals amazing leg, head and shoulder space in the front and back for adults above-average height. The boot isn’t neglected either, as it’s got 461 litres of space plus folding rear seats with a flat load area. 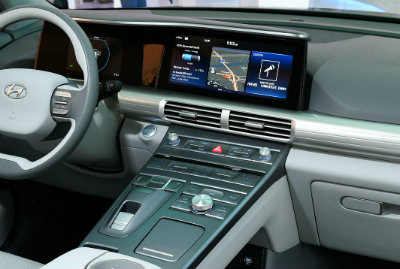 Technology
Although to cope with the driving experience of the Hyundai Nexo, they have been generous as usual with their technology by including lane keeping aids and adaptive cruise – therefore, you can drive semi-autonomously as an option. Our favourite feature was the blind-spot view monitor – this delivers you a display of view over your shoulder from a camera in the side mirror on the dash when you indicate.
Practicality
You can find beneath the floating centre console, there are a wireless charging pad, two USB sockets and some additional storage features. Furthermore, there is a decent sized glovebox and a cubby under the large armrest between the front seats.


To conclude, the Hyundai Nexo SUV will sit around the £55,000 mark and although it is expensive, we’d say the Nexo is the better option over the iX35 because of how much of a premium product it is.