Are you a part of this guilty party?

The UK has been identified by IAM RoadSmart to have some of the highest fines for hand-held mobile phones in Europe – but even with so many UK motorists remaining undeterred, there are almost 12,000 drivers a year still being prosecuted for this common offence.
A survey has been conducted by top German motoring organisation ADAC showing many European countries have low financial punishments for using a hand-held phone while driving.

These including countries like:
All of which have fines of under 100 Euros. On the other hand, Germany fines up to 100 Euros, France 135 Euros and Italy 160 Euros. At the equivalent of around 225 Euros, UK fines are only beaten by Holland (230 Euros) and just pip Spain and Denmark at 200 Euros.

Despite, the possibility of a £200 fine and six driving license points, figures published by the Ministry of Justice show the number of offenders convicted of “using or causing others to use a handheld mobile phone while driving” stood at 11,961 for 2016. Also, IAM RoadSmart’s own Safety Culture Survey showed that 90% of those surveyed felt the dangers caused by people accessing social media or email messages while driving was a significant threat to their personal safety and they felt it was an even bigger threat than drink-driving. 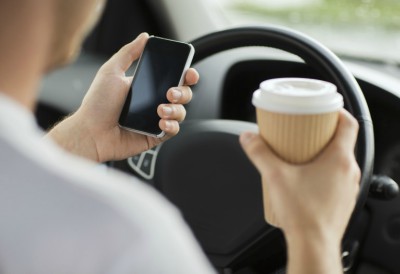 Sarah Sillars, IAM RoadSmart Chief Executive Officer said: “Motorists need to make the connection that using a hand-held phone is a major distraction to the task of driving. There is no such thing as multi-tasking when it comes to driving – when you drive, there is nothing else you should be doing.”

“Handheld mobile phone use is a top concern for British drivers and heavy fines and extra points are a key part of the government strategy to combat it. Clearly, this is not enough and unless selfish drivers fear that they will be caught, far too many will continue to flout the law.”
“What we want to see is a combination of effective penalties, more personal and corporate responsibility and vehicle, smartphone and social media companies working together to generate hi-tech solutions to the distractions caused by their technology.”

“No call is worth risking your own or someone else’s life for. Remember, make the glove box the phone box and put temptation out of reach,” she added.

If you’re interested in finding out more information about the use of handheld device whilst driving and other common major driving offences and their consequences, click here!